Starting from the past weekend at least five towns located in the Ethiopian Somali regional state were hit by rare public protests for four consecutive days. The protesters in the towns of  Afdem, Bike, Erer, Shinile and Hadhagala district, Sitti zone, were denouncing the regional state’s maladministration in general and accusing the president of the regional state, Abdi Mohamed Omar, a.k.a Abdi Illey, in particular of “endemic nepotism and corruption”, according to protesters who spoke to Addis Standard by phone. This picture sent to Addis Standard by a source close to the matter show the protest in Hadhagala district, Sitti zone.

The two sources who are from Jigjiga, the capital of the Somali regional state, and who do not want to be named for fear of reprisal against their families, (something critics of Abdi Illye say is very common), said although discontent against the regional administration were not new, this week’s protests began “simmering underground” ever since claims of the release of 1, 500 prisoners by the administration were made, which, our sources said, were “fake and simply fabricated for media consumption.” “Most of the prisoners allegedly released by the regional government have been returned to the notorious jail in Ogaden,” a  prison off the beaten radar of mainstream media coverage.  “The actual number of prisoners released is not more than 25,” said one of the sources. 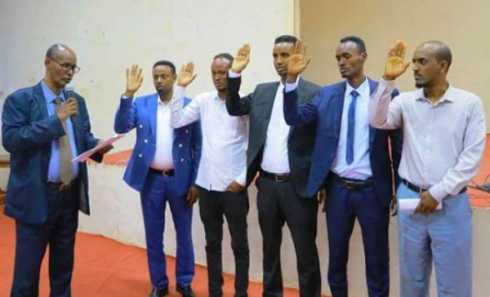 Ethiopia – Amidst rumors of internal crisis within the Ethiopian Somali People’s Democratic Party, ESPDP, the regional state reshuffles its cabinet ESPDP is one of EPRDF’s 5 satellite political parties, but governs the 3rd largest Ethnic group in Ethiopia

While the protests were ongoing, on April 24, the Ethiopian Somali People’s Democratic Party, ESPDP, one of the five satellite or sister parties of the ruling EPRDF and the party which is governing the Somali regional state, reshuffled its cabinet  following an emergency meeting. But our sources said the reshuffling was “a sign of the deepening crisis within the party.”

The regional president Abdi Illey replaced his deputy, Abdikarim Igali, who is from the protesting constituency in Shinile, by Hamdi Aden Abdi, who is also doubling as head of the region’s health bureau. Both our sources said Abdikarim Igali was not simply replaced, he was “sacked” because, to quote one of the two: “Abdi Illey’s administration is afraid that Abdikarim will side with the protesting people of the Shinile zone, who are from the Isaa community and are seriously marginalized; the administration is worried that Abdikarim will mobilize his people against Abdi’s rule.”

“This has been a long established practice by the president ever since he assumed his position in 2010,” said our second source, “he is running the region like his own family business. If you do not have family ties with him or if you are not loyal to him, you are the enemy.”

There are also widespread discontents about “the relationship between Abdi Illey and senior military members” of the highly controversial “Liyu Police”, a special paramilitary force operating in the region and is repeatedly accused of committing serious crimes. According to one of the interviewee, who said he lost his a close friend to the recent displacement of more than a million Oromos and hundreds of Somalis from the region including the city of Jigjiga, “the ordinary Somali people of the region are fed up with all the conspiracies between the military and the regional administration. It often doesn’t make it to the media but we are as much victims of this administration as the millions of Oromos and Somalis recently displaced from the region.”

Both our interviewees warn of potential inter-clan conflicts “unless the federal government starts to pay due attention to this rampant abuse of power by the regional administration.”