The Ethiopian Peoples’ Revolutionary Democratic Front (EPRDF) has decided to fully implement the Algiers accord and the decision of the boundary commission established to demarcate the border between Ethiopia and Eritrea. This was announced in a communique the party issued after its Executive Committee meeting today.

The Algiers accord was signed between Ethiopia and Eritrea two decades ago to put an end to the bloody two-year conflict of 1998-2000 that claimed the lives of thousand soldiers on both sides. The boundary commission had awarded the contentious town of Badme to Eritrea.

The Front has also vowed to show commitment in the implementation of the accord in order to bring benefits to the brotherly people.

According to the communique, the Front further decided to partially and fully privatize state-owned enterprises including railways, industrial parks, hotels and varous manufacturing establishments.

The Committee announced that minority shares in parastatals like Ethio Telecom, Ethiopian Airlines, electric power generation plants, Shipping Lines and Logistics Services Enterprises be transferred both to local and foreign investors with the government retaining a majority stake in all. 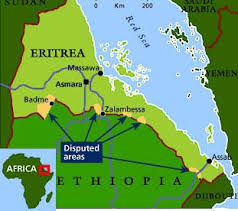